Before I taught my first snowflake-making lesson, I felt like my stomach was inside-out. No matter how clear you think you are, students have a knack for interpreting things a thousand different ways and are constantly asking for clarification (Like this? Is this ok, Ma’am? Is this right???).

They have a hard time following simple directions on a worksheet, and I was worried that I wouldn’t be able to properly explain how to make a six-pointed paper snowflake.

As it turned out, what I thought was going to be the most challenging step—folding the paper into overlapping thirds—actually turned out to be easy for them.

I drew a picture of a triangle on the board and demonstrated how I wanted them to divide their triangle into three smaller triangles with equal bases. At first, I heard a collective “Huh?” from the class. After a second explanation, most students got it and had no trouble measuring and folding the paper. Scales (or rulers) are a standard part of my students’ pencil boxes.

Most students—even those in Class 5—were precise and did a better job folding the paper than I ever could, even if I had a ruler. I was surprised to see that many of my students made some truly stunning snowflakes with beautiful layers and patterns. It’s a hasty generalization, but I think kids in India are overall better visual-spatial thinkers than kids in the U.S.

I did this activity with five separate classes in one week. (I think I can pretty much make six-pointed snowflakes in my sleep now.) It was very interesting to see the differences and similarities in how students responded to the activity.

Class 6A students pretended their snowflakes were masks. Some even said they felt like Spiderman!

Guess what? I’ve already made 15 snowflakes!
That’s the difference between Class 7 and Class 5. Within one period, most of my Class 7 students made 3-4 snowflakes and two made more than fifteen. The Class 5 students each only made one snowflake in the same amount time.

Ma’am, it looks like a sandwich!
Class 5 unanimously thought the triangles looked like sandwiches and Class 7 thought they looked like hats. One student in Class 6 also said my sample snowflake looked like a stove top.

Can you cut this for me?
Nothing more annoying than whining students. I didn’t expect that I would have to teach Class 5 and 6 students how to hold a pair of scissors. A lot of them were trying to cut with the tips of their scissors rather than the inner blade.

I think I did something wrong…
If you’ve ever made a paper snowflake, you know that the last step involves unfolding the layers of a tightly folded piece of paper. There were a couple students in each class who somberly showed me half a snowflake and said they didn’t know where they had gone wrong. To which I said: Unfold it one more time. The look of relief on the students’ face was priceless.

Ma’am, I’ll help you clean up the glitter.
Some students are gems. Several in Class 7 offered to help me clean the classroom after the activity. I carried the trash can around the classroom, and a few said:  Ma’am, Ma’am! Don’t touch that. It’s dirty.

It’s completely acceptable for a teacher in the U.S. to hold a trash can; in India, there’s more of a hierarchy. You see it in small things—like when students always insist that you sit on a chair instead of standing or when they offer to carry your things for you. 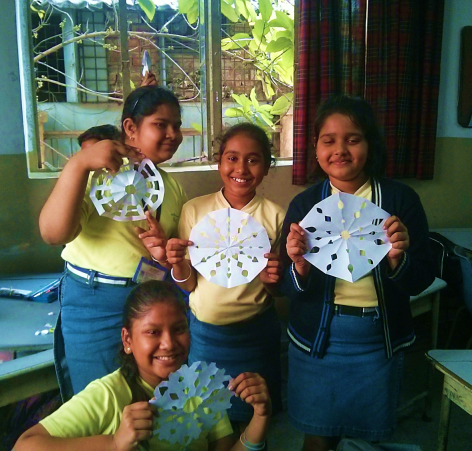 After we did this lesson, some of the Class 5B students told me they tried making snowflakes at home. I was surprised that they enjoyed the activity so much.

It’s actually been a while since I did this lesson—two weeks to be exact. School has been closed for winter vacation since Dec. 20 and will re-open on Jan.4. Naturally, I’ll be taking a break from my Student Quote feature.

Good news though is that I’ve finally updated my timeline. You can check it out by clicking here or clicking on the “Timeline” tab. Enjoy!

One complaint, one question, and one interesting answer. Enjoy!

Ma’am, Ma’am, he’s poking me with a compass!
In India, tattletaling isn’t looked down on as it is in the U.S. These are some of the other complaints I’ve heard: He’s disturbing me! This boy is distracting me! This boy is drawing on me! This girl is stealing my pencil box! He keeps talking and I’m trying to do my work! This boy is saying slangs! This boy is hitting me!

Why is the story called “Diary of a Nobody”?
Definitely realized I did something wrong when we spent two classes discussing the story and several students didn’t understand the meaning of the title.

His parents were happy because they didn’t have to feed him anymore.
There are always one or two students in each class who have an out-of-the-box approach to answering questions. In Class 5, we read “Harold the Hornbill,” a short story by Ruskin Bond. Harold is a baby hornbill and is always hungry. One of the questions on the worksheet was: How do you think Harold’s parents felt after they lost him? Most students wrote: His parents felt sad. (The answer I had expected them to write.) The student who said that the parents were happy surprised me with his clever response.

Ma’am, I used personification. Just like how we talked about in “Daffodils.”
The dedication some students have never ceases to surprise me. I taught Class 7 about personification four weeks ago when we studied “Daffodils” by William Wordsworth. This student remembered and used personification in the creative writing activity we did this week. These kinds of moments are always the highlight of my day.

Ma’am, you’re looking so pretty today.
No makeup, didn’t sleep well last night, and I’m not even wearing a dupatta. The other ETAs have told me they get the same compliment under similar conditions. Kids are so sweet.  (Or they’re just trying to get higher grades.)

It’s amazing how a simple set of instructions can elicit so many questions.

Imagine you are Nicholas. Write a short story starting with the phrase: “Yesterday, I got in trouble because…” Describe what happened and how you handled the punishment.

I gave this writing prompt to my Class 7 students. We had just finished reading Hector Hugh Munro’s “The Lumber Room,” a short story about a witty boy named Nicholas who gets in trouble and repeatedly outsmarts his aunt. These were the questions that came my way over the next twenty minutes:

Ma’am, should we write in our Language or Literature copy?
Do we need to write the question in our copy?
Is this story supposed to be about Nicholas or about us?
What if I’m not really a naughty person?
Should I include Nicholas’s family in the story?
Why are you telling us to be the person who gets in trouble and also be the person who gives the punishment?
What should the heading be?
Can I write my story all in one paragraph?
How long does it have to be?

In India, students have a “copy” or notebook for each subject. They do all their classwork and homework in their copies. It’s very rare to see teachers handing out worksheets or students doing work on loose sheets of paper.

My students don’t have a generic English class—they have Language, Literature, and Creative Writing. This means that I always have to specify which of their three English copies I want them to write in. As you can tell from their questions, students are also incredibly concerned about how they should format their work.

Despite the initial confusion, most of the students understood the assignment after I re-explained the directions. By the end of class, I had a stack of copies with stories about broken glass, stolen cookies, pranks with rubber snakes, broken television sets, and angry mothers.

One useful technique I learned from that lesson is to ask the whole class some clarifying questions after I give out the instructions.

Last week during Creative Writing, I handed each student colored paper and pictures of nature and explained this fictional scenario:

I’m your boss and we all work at a travel company. Tourism has gone down because people are too busy or too lazy to travel. Now, I need you to describe your picture with as many details as you can to encourage more people to travel.

Then, I asked the whole class these clarifying questions:
Can you write something fictional?
Should you give your place a name?

To which most of the students chorused: Yes. Only a few thought the answers were No, but their voices were drowned out by the people who answered correctly.

This strategy saves a lot of time because it means I don’t have to answer the same question many times. The activity went really well, and the students were happy to see their work displayed in the hallway.

Students are always excited to do anything that involves pictures or props.

Students say some pretty crazy (and often entertaining) things. Here are three of my favorite student quotes from the past week:

Do I need to use my imagination to answer this question?
During my Class 6 creative writing class, I asked students to create a new holiday and write a paragraph about how they celebrate it. Most students understood the assignment, but a few were a bit confused.

Do I win if I make a 90 degree angle?
The Class 5 kids got really into the “Thanksgiving Bingo” review game I made.

Ma’am, his handwriting is so bad. If you dip an ant in ink and stick it on paper – that’s what his handwriting looks like.
Students love putting each other down. They’re always teasing each other and joking around. One of my favorite moments was when a Class 7 boy drew a fish on the chalkboard. He scribbled all over it until it looked like a ball of yarn. Then he pointed to his friend and said, “Ma’am, Ma’am! See – that’s what his face looks like.”

I’ll be making this a regular feature on my blog. Be sure to check back next Monday for more quotes!