As the train crawled out of the station, a short man began pacing up and down the aisle. He was one of the many vendors who made their living selling goods on trains. Carrying a metal bucket full of Bisleri water bottles, he shouted: Pani, thanda pani. Pani, thanda pani! (Water, cold water!). A few minutes later, another man came–this time selling chow mein and paneer pakora. My friend, Arjita, laughed when she saw my expression of surprise. “Trust me,” she said. “This is only the beginning.”

It was mid-afternoon and we were taking the Ipsaat Express from Jamshedpur to Kolkata. Located in Jharkhand (a neighboring state of West Bengal), Jamshedpur is known as “Steel City.” India’s largest (and oldest) steel plant, Tata Steel, is located in the center of the city. It’s also home to a Tata Motors factory that used to manufacture railway locomotives and currently manufactures construction vehicles. (These are just some fun facts. We didn’t go to see the steel plants–we went to speak with teachers at an NGO.)

Jamshedpur is a 4-5 hr train ride from Kolkata.

The strangest thing I saw on the train? Probably the man displaying a red, checkered bedsheet to the passengers and shouting, “One bedsheet for Rs. 60; two for Rs. 100!” Either that or the vendor who had fifty colorful rumals (handkerchiefs) draped over one arm and fifty pairs of socks slung over his other shoulder.

Watching the vendors was, to say the least, very entertaining. On the train ride to Jamshedpur, we didn’t see a lot of vendors because we rode in the air-conditioned car. (Indian Railways doesn’t allow too many vendors to sell goods in the AC cars).

On our return trip, we saw many more because we sat in the non-AC car. Most of them walked through the train cars multiple times. Every time I heard the words paneer pakora, I was tempted to buy one. But being from America means having a relatively frail immune system when it comes to eating street food in India, so I had to say no.

Hot drinks are always a safe choice on the train. 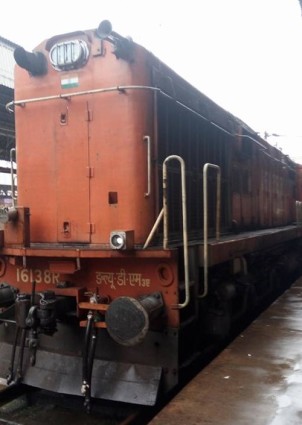 Took the BBN-Janashatabdi to Jamshedpur.

The non-AC car wasn’t as hot as I expected it would be. Probably because it was July and the height of the summer was in April/May. Halfway through the journey, I did however feel myself catching a cold. It was probably from all the different waves of air rolling over my skin. The air inside the train was warm; cool, dry air was blowing from the ceiling fans; and warm, humid air was blowing in from the open windows.

By the end of the five-hour journey, I was sticky and shivering. My cold was gone by the time I woke up the next morning, so I don’t think I was really sick–just confused by the changing temperature inside the train.

Taking a train is definitely a must-have experience for anyone who is visiting India. I tried to capture my experience here, but it’s really one of those things that are better experienced than simply read about. Traveling by train–even in the AC car–is also relatively inexpensive in India.

And who knows? You might just find sipping Indian Railways chai and reading a photocopied book to be the best part of your journey.

For two long weeks in early July, various characters drifted in and out of our home – mostly to deliver and install our household appliances. I still remember the phone call we had with our landlord before moving in. “No appliances? No problem! Fridge, stove, water filter microwave, washing machine – I’ll buy everything and it will be there before you move in.”

I’m pretty well-acquainted with IST, so I didn’t have high hopes that he would keep his promise. As I expected, only a lone microwave was sitting in the kitchen when we moved in.

And then the saga began. Phone call to the landlord. A promise that the appliances would be here in one day, two days tops. No appliances. A few more phone calls. Fridge and washing machine arrive. We plug in the fridge but can’t figure out how to assemble the washing machine. Mechanic comes (unannounced) one morning to install the machine. He realizes the machine is missing a piece so he goes out to buy it. And so on.

Our landlord lives in Durgapur, which is a three-hour drive from Kolkata. So most of the time, we were on the phone with his staff members, Tapn and Vicki, who would then call their other staff (whose names I never found out) to deliver and install the appliances.

I found our situation more comical than cumbersome. I didn’t feel like I had a reason to complain – I knew that we would eventually get the appliances. For some reason, reassuring myself that I won’t be stuck in a situation forever almost always comforts me. I think the cliche way of saying it is “This too shall pass.”

For a couple weeks, we were sharing one key between the three of us. The landlord always had three keys – he just couldn’t give one copy to us because he needed to keep it in the bank. (Some legal formality.)

So Tapn gave us one key and took the second one to make a copy of it. Three times he came with a new copy and – even with a little oiling – none of them worked. I’m thankful that the copy he made yesterday clicked.

All in all, our Hazra saga is reaching its denouement. There’s only one question left: How will we fix our leaking water filter? Every morning when I wake up, the kitchen counter is flooded with water. We don’t mind wiping it, but it’s dangerous to have pools of water around our electrical appliances.

It’s wishful thinking, but I’m hoping there’s a plot twist and that we can get our filter fixed by this Monday.

(Or, you know, at least next Monday.)

After receiving the Fulbright ETA grant, I had many conversations that went like this:

“Congratulations! Where will you teach?”
“I’ll be at Akshar School. In Kolkata. It’s the capital of West Bengal.”
“Wow. So where will you live?”
“I’m not sure, I’ll see when I get there.”

And then the other person would give me a slow nod. Kind of like the nod you get when you say you’re an English major – except slightly more concerned. Of course, I would then explain that the United States-India Education Foundation (USIEF) had carefully planned the house-hunting process and that a real estate agent, a broker, and local college students would guide us through every step. (Although, most were still skeptical even after hearing this explanation.)

Thankfully, house-hunting was a smooth process – much smoother than I could have imagined. I will always be grateful for the support we received during our first week in Kolkata. I can’t remember the exact number of apartments we saw – I think it was five or seven though. In any case, it was a lot.

The college students (Swatilekha, Uzma, and Sarajit) not only helped us negotiate with the landlords, but also gave us advice on each neighborhood’s safety and proximity to the metro. Aside from apartment-hunting, they helped us do our initial shopping (pillows, bedding, cutlery, etc.), buy SIM cards, and get metrocards. I was jetlagged, but I’m glad we were busy and outside every day during that first week. Otherwise, I could have easily slept all afternoon and felt homesick.

Now, I am happily living with two other Fulbright ETAs – Payal and Tamar – in a three-bedroom apartment in Bhowanipore. We live off of Hazra Road and our flat is about a 5-10 minute walk from the Jatin Das Metro Station.

This is my bedroom. I’m lucky to have desk and two large almaris (storage cabinets) as well.

The red light shows that the geyser is on.

Each bedroom and the living room have AC – which is a luxury. The bathrooms also have geysers (water heaters) – which is also a luxury. If you don’t have a geyser, the only way you can take a hot shower is by boiling water on the stove and pouring it in a bucket. I’ve only used the geyser a few times so far; I’ll probably use it more often in the winter.

Side Note: The ETA program in India is nine months long – but our landlord refused to rent the apartment to us for anything less than eleven months. Initially, I thought that paying two extra months of rent was a waste of money. But now I’m thinking – maybe it would be nice to spend some extra time in Kolkata.

Family, friends, Fulbright ETAs/Researchers – you are more than welcome to contact me if you want to stay with me in Kolkata anytime between April 6 and May 28. My roommates will be leaving (at the latest) on April 6, so we will have two empty bedrooms.

Kolkata is a wonderful city – definitely email me at sgelda@buffalo.edu if you’re interested in visiting!

Interested in applying for the Fulbright ETA? Check out my FAQ page.